The question of being able to use bear mace to deter an attack from a human is quite common. There are similarities in the way bear mace works compared to the pepper spray you would use for self-defense. If you find yourself needing to know more about bear mace and how it can be used, you’ve come to the right place.

We will answer the questions of:

Ready to get started?

Bear mace is specifically designed to protect you in the event you have a run-in with a bear. The main active ingredient, oleoresin capsicum, is used to get a bear to back off. It does this by causing some of the same symptoms that pepper spray would cause a human, but more mildly, so it sends the bear off but doesn’t harm them.

When used during a bear attack, bear mace can deter the bear.

It is not meant to completely incapacitate the bear or cause it any injury. It is only meant to scare the bear off so you can get to safety.

However, it must be used properly to have this effect:

Most bear mace canisters are only good for one-time use so it is important to carry more than one with you if you are out in the wild and may come across a bear or two.

Check out Sabre’s “Frontiersman” bear mace as an example over on Amazon.

Is Bear Spray the same as Pepper Spray? 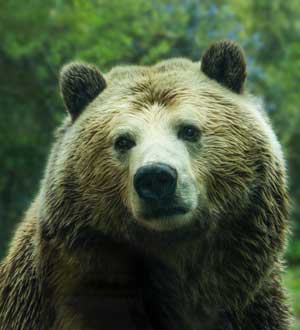 Pepper spray is also used in much the same way as the instructions for bear mace above.

What Does Bear Mace do to a Human?

Since bear mace may contain as little as 20% of the oleoresin capsicum that pepper spray for use on human attackers will have, the symptoms are quite different.

Bear mace will likely only cause irritation and mild burning. This may not fend off an attack by a human, especially if they are already coming at you in an aggravated way.

Bear mace is designed to deter a bear but not cause it any harm or even long-term effects.

On the other hand, pepper spray is specifically designed to incapacitate an attacker.

It is important to have the right protection with pepper spray if you are worried about humans attacking instead of bears or dogs.

Does bear spray work on humans?

Many people want to know if they can use Grizzly Bear Pepper Spray on humans.

The answer probably isn’t what you want to hear:

While bear mace may produce side effects that will deter a human in certain situations, it isn’t recommended.

When using bear mace instead of pepper spray, you may only aggravate the attacker even more, causing a bigger problem.

Pepper spray will be much more effective against an attack from a human.

Pepper spray causes much more intense effects which can incapacitate your attacker, allowing you to remove yourself from the area.

These side effects make pepper spray a much better option for use in self-defense against humans.

What Features are Important in Bear Mace or Pepper Spray?

Whether you are looking to purchase bear mace for use in self-defense or for your next hiking or camping trip, you want to keep a few things in mind:

You should be able to spray for at least 8 seconds, but more is better.

Even if you want to carry only one type of mace while camping or hiking and choose to go with bear mace, the product should meet or exceed the factors listed above.

Pepper spray features are a bit different when shopping to protect yourself against a human attacker.

You will want to look for:

One of my favorite choices for pepper spray (to use against humans) is Sabre’s Pepper Gel, which is sticky when shot in someone’s eyes, making it more difficult to remove and recover quickly.

So, for self defense purposes – how do you best defend yourself from an attacker?

Here’s a video (a bit infomercial in style) from Sabre, showing how to properly use pepper spray:

What is bear spray used for?

Bear spray is mainly used when you’re facing a bear that is charging you, or is aggressive in some way. To be most effective, you want to spray the bear when they’re anywhere from 5 to 9 feet away from you.

Is bear spray the same as pepper spray?

Yes and no. While the active ingredient (oleoresin capsicum, the “OC” in “OC Spray”) is the same, the concentration of it is much lower in bear spray than in the usual pepper spray. That’s why bear spray is legal everywhere, while pepper spray for humans is still illegal in some states. In Canada, bear spray is illegal if planned to be used on humans.

Can bear spray be used on humans?

A surprisingly popular question! Because it has a lower capsicum concentration, it’s much weaker than normal pepper spray/OC spray. That means that while it might affect a human, it’s probably not going to have the effect you want. If your goal is to stop a human attacker, you’re better off going for the real thing – a powerful can of pepper spray.

Is pepper spray effective on bears?

Many people ask about using pepper spray on bears – does it work? Depending on the type of bear you’re facing, one study found that the spray was effective anywhere from 90% to 100%. Despite having a lower OC level than human pepper spray, it works just fine on bears. If we’re talking about human pepper spray, though, it’s not going to be as effective against a bear as bear spray will be.

Check out this video for some tips on using bear spray effectively:

The main ingredient that you’ll find in bear spray is the same as in pepper spray – oleoresin capsicum. This is what causes irritation to the eyes and nose, deterring a bear from attacking you. Usually, bear spray contains about 1-2% of this active ingredient.

Bear spray vs pepper spray for self defense – which is better?

If we’re talking about self defense against humans, the winner is going to be pepper spray. If you confront an attacker with bear spray, they may be able to easily fight against the lower capsicum content and through the cloud of spray. With pepper spray, you’re going to fire a fast stream of the liquid or gel directly into their face.

Nope. Just the opposite – the pepper content in bear mace is lower than pepper spray used for self defense against humans. Aside from that, the main difference is that bear mace is sprayed in a cloud, to fill the air with the capsicum droplets and stop a bear from attacking. Pepper spray, on the other hand, is shot directly into the attacker’s eyes in a stream to stop them fast.

Can you use pepper spray on bears?

Not really. It’s not going to be effective against a bear and the different delivery method is going to be less of a deterrent to keep bears away from your surroundings. Pepper spray fires in a stream, to hit an attacker in their eyes and face. Bear spray creates a cloud of capsicum in the air, keeping bears far away.

Ready to Defend Yourself?

While bear mace may be ideal when in the country or even against dogs you may encounter while out jogging, the best protection is from pepper spray when in urban areas.

Keep pepper spray handy when going out at night, when walking in sketchy neighborhoods, or even when walking to your car when it is dark.

Bear mace may fend off attacking bears, dogs and other animals, but it is simply no match for human attackers.

Defend yourself with pepper spray, instead – you can find some great choices in our post here.